On Saturday night I made my way, along with Nicky and Emma (100 Days No TV), to Anglia Ruskin in Cambridge for the Square Peg Fashion Show. You may have seen last weeks post explaining all about Square Peg but if not you can still check it out..

When we first walked in we were met by a table of drinks (I went for my fave non alcoholic Belvoir) which was next to the most delicious nibbles from Eat The Rainbow. My favourite had to be the lemon buffalo mozzarella and pickled fig crostini which smelled and tasted really festive.

There were various other stands to peruse including OJT Designs who I was familiar with from Cambridge Style Week, and it was great to finally meet the team behind the brand. OJT create custom made luxury leather accessories and I was looking forward to seeing their designs on the catwalk.

The show was opened by Alexander Huck who is a Cambridgeshire based designer and he had created an exclusive ‘Resort Collection’ especially for Square Peg. There were so many designers, too many to mention them all, so I will pick out who really stood out for me.

Karen Faulkner-Dunkley creates some of the most beautiful jewellery and she has produced a collection specifically for Square Peg. The Perseverance Collection has been designed around the Hydrangea which symbolises ‘perseverance’ and from each sale made, £10 goes directly to the charity.

I briefly mentioned OJT Designs and I was not disappointed with the pieces they showcased. The coats look like they would do a brilliant job of keeping off the chill whilst still being stylish, and their bags look such high quality I think they would last a lifetime. 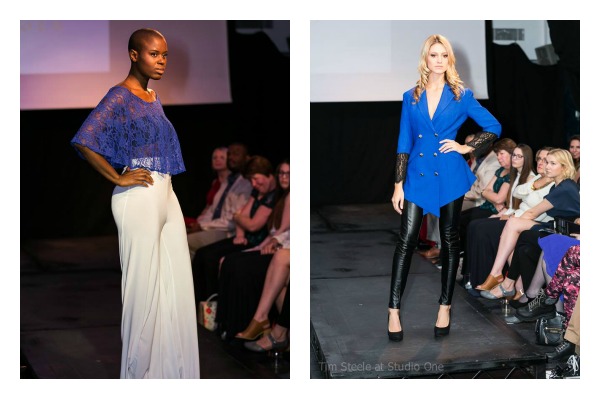 Karen Gold started the trend for rich jewel tones and her blue jacket with black lace detailing to the sleeves was right up my street. I am a fan of her clean, sharp tailoring which gives an effortless style perfect for any season.

Luxury designer brand Bernhard Dyne showed gowns and cocktail dresses which is perfect timing as party season is looming. I love the lime green gown but I doubt it would look as good on me as it does the model!

After the first half there was an auction which was overseen by David Palmer. There were some great lots up for grabs including some of the fashion we had seen on the catwalk, studio time with professional photographer Tim Steele, a flight in a Tiger Moth, curling iron, James Bond related accessories, and so much more.

Another trend that popped up throughout the night was crisp, clean white. Omar Mansoor showed his stunning SS16 collection which had been inspired by the Russian Imperial style. His range of dresses and jumpsuits had a simple yet sophisticated design, each featuring elaborate insignias.

Overall it was a great night and I was pleased to be able to go along and support such a worthwhile cause. I shall be updating this post to let you know how much money as raised on the night so stay posted!

Before I go I would also like to say a special thank you to Tim Steele from Studio One for allowing me to use his photos from the night.