Next up in our series is Lili-Marie La Touche Boutique, an up and coming fashion designer who is inspired by architecture. Lianne Marie La Touche was born and brought up in London. Studying textiles at GSCE level gave her the chance to research various fashion designers and materials, widening her knowledge of creating unique pieces. This led on to studying fashion at both college and university. Lili-Marie La Touche Boutique was created shortly after Lianne’s second year at university. The brand was launched on Facebook in July 2010, and the social networking site provided the perfect platform to showcase her work.

Whilst at university she became interested in architecture, paying close attention to framework, structure, shape and details and then incorporating this into her garments by researching and experimenting with textile manipulations and pattern cutting. After graduating from fashion, she gained experience working with a number of fashion designers including Afira.

During my time at university, I took an interest in architecture. I paid close attention to the framework, structure, shape and details, and decided to incorporate the architectural elements within my garments. I researched and experimented with textile manipulations and pattern cutting to get a real sense of architecture within my designs.

Since graduating, my collection has been featured in various different publications. My work was recognised in Devon Life Magazine (October 2011 issue) alongside six other graduates, and since then has been featured in Tribe Magazine and Tribe: Blog, The Debut magazine, BlackHair, HairBliss and Confashion magazine. And also has singer Shanay Holmes wear pieces from the label for an interview with The Cut magazine.

What inspired you to start up the brand?

Whilst I was in my second year of university, I thought to myself that I should set up a platform to showcase the work I was producing. I set up a page on Facebook to showcase to friends, families and fashion lovers. It wasn’t until I finish university that I decided to commit to my label.

How would you describe your clothes?

A structured collection heavily influenced by architecture, but with a clean cut. Some of the garments are daring, others are structured, but mostly wearable.

If you weren’t in fashion what career would you have chosen?

I have always had an interest in anything creative; I studied art and design first before going into fashion. It would always involve creativity in some way, but I am not too sure really. Most recently I took an interest in teaching, looking into becoming a textiles teacher, but that would be a future career.

Which designers inspire you?

Hussein Chalayan is an incredible designer, the concepts behind his work are just amazing. He is definitely an influential designer. Alexander McQueen has always been my favourite designer, his label is highly creative, and it just continues to get better. Most recently Stella McCartney’s clean lines and simple cut has caught my eye. Her pieces have really come up trumps.

If you could collaborate with any designer, who would you choose?

I love knitwear; I would definitely like to collaborate with a knitwear designer at some point in the near future. But if I could collaborate with any designer it would have to be the late Alexander McQueen, he has always been my favourite designer and I have to say Sarah Burton has kept his label alive. 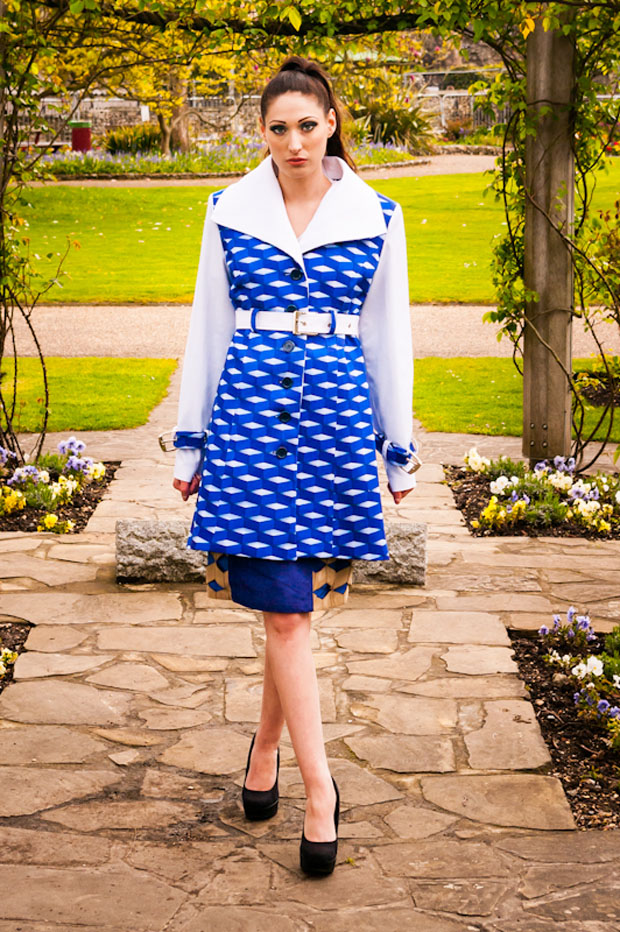 Which celebrity would you love to see wearing your clothes?

I would love to see Solange Knowles, Shingai Shinowa (The Noisettes), Jessie J, and Rita Ora to name a few. I love how they put clothes together, they aren’t afraid to wear colour or to wear structural pieces and my work reflects that.

What do you enjoy most about creating your own lines?

I have the freedom to create what is in my head; I have so many ideas that change all the time, but that is what I love. I am able to bring art into my garment, whether it is avant garde or subtle. But what amazes me all the time is seeing the illustration and the idea come to life in 3D. When I was at university I fell in love with pattern cutting, it is the first stage of the garment construction process, where the drawing becomes something else.

How did you get involved with HSFW?

HSFW followed me on twitter, so I followed back. I then got an email from the organiser asking if I would be interested in showcasing. I thought about it, and then thought why not. Twitter is a great place for opportunities and I haven’t done a fashion show other than when I was at university. So this will be the first one of my own label.

How is preparation going?

The preparation is going ok at the moment, but now that we are in April it makes me realise how close we are to the fashion show. I am in the middle of organising a shoot prior to the show for my Look book, so it’s a very busy period.

What are you looking forward to most about attending?

I will use this opportunity to gain exposure for my label and to network with other designers, press and bloggers. It will be a great way to see the direction I am going in, as I am working on my label part-time. It is good to get a different perspective on the label and garments, and to gain new contacts.